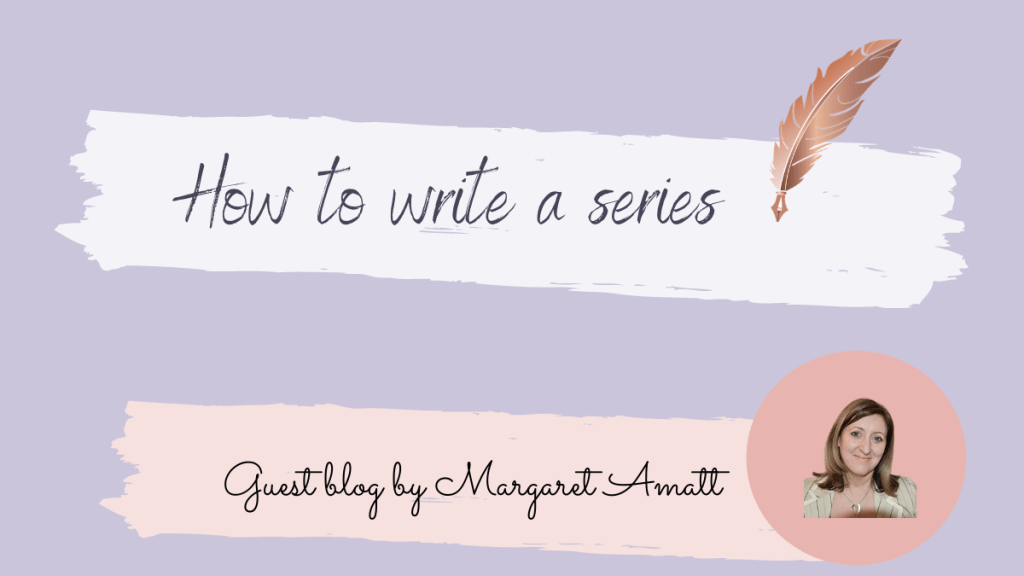 How to write a series of romance novels

Should I write a series? It’s a question that occurs to most authors at some point in their lives. You’ve spent ages creating your characters and their world, why would you want to leave it behind after just one book?

And readers love a good series! There’s nothing quite like the feeling of finishing a good book and knowing there’s still more to come. Because, lets face it, your readers don’t want to leave that wonderful world of your creation either!

There are lots of things to consider when planning a series but the first one should be to choose the type of series you want to write.

Choose the type of series (standalone or sequence)

A good series is often one which follows a character on a journey. This is a sequence series. In each book the characters live and grow and carry out their adventures. But as a romance writer this often isn’t a satisfying route for either author or reader in a series. Romance novels focus on the relationship between the two leads, meaning readers expect each book to finish on a happy note usually with the lead couple getting their happy ending. It’s a difficult task to stick with that couple for several more books. They’re unlikely to need to fall in love all over again for another four or five books! If you want to go down this route, there must be obstacles and relationship growth in every book. This can be a tough ask over a lengthy series.

For my series, Scottish Island Escapes, I decided to go with a standalone series. This means that although the books are all linked by the location, the couples in each of the five books are different each time. The stories follow a chronological timeline but each book could be read as an individual story. However followers of the series will have an enhanced experience as they will get to know the recurring characters.

Right from the off that meant creating ten characters, five couples, five unique story lines, and a drop in and out of characters from the other books. You can see how the logistics soon start to mount up, so how do you keep track of who does what where?

When I started writing my series, I was already one book down! That book ended up being book 4 and was never meant to be part of a series. However, almost as soon as I finished the first draft, I realised there was potential in it to make something bigger. The idea for the series stared as a page in a notebook divided into five with the possible names for the characters scribbled onto them. This was ok as a starter but there as no way it was going to be enough to keep me going through five books. Not when the characters started growing. I needed a way to keep track of everyone! This leads me to Tip Number Two.

Start this right at the beginning by noting who will star in each of your books then add to it as you need to with their families, friends, colleagues, enemies etc. Try and make your characters distinctive. They may all live in the same place, be friends or share something else in common but they all need to be individuals. You can give each character a keyword or phrase – something to quickly bring them into your mind. For me this is sometimes a nickname another character gives them during the book e.g. “the grumpy man”. Or it might be something that reminds you of their looks or personality. One of my characters has the keyword “red” because she usually wears that colour.

It’s amazing how quickly you forget details. If you don’t want to go searching back through several pages to remind yourself what you named the hero’s auntie, make a list! Or better still… Follow the next tip!

I created my series bible as an Excel Spreadsheet though there are many ways you can do this both online or on paper. Mine started off as my character list and grew! I added fields as I needed them to keep track of who was who, what age they were, hair colour, height, pets, cars etc.

But the series bible is so much more than a character list. In a series you need consistency both in characters and in your writing style. Characters aren’t the only thing you need to remember. You can add as much as you need to the series bible. I have sections to keep track of places (which ones are real, which are not!). I take notes on where people are at certain times so they don’t appear in a scene when they said they’d be on holiday that week! I’ve also collected data on where my characters bake or cook in the books so I can provide recipes for my newsletter subscribers.

This is also where you should keep your style guide. Here you can note things such as whether you use ok or okay, in your series. You might take note of how you spell dialect words or series specific words. I also have sections here for when to use italics and quote marks and how I format texts messages and emails in this series.

You decide what’s important in yours but keep it up to date, you’ll be surprised how often you need to check something.

Aimee has a DIY series bible to help you get yours started or you can pay for series bible creation if you’d like someone else to do the hard work for you!

Writers around the world will fight the corner for the pantser or the plotter… Do you fly by the seat of your pants and just write or do you plan to the nth degree? Most authors I know do a bit of both. In general I see myself as somewhere in the middle though leaning towards plotter; a plotster! I like to have a plan but keep open enough to allow for spontaneity.

When writing a series however I believe you should make a plan.

When you go on any journey you want to a have at least a rough idea of where you’re going. Even if you vaguely know your destination but aren’t sure how to get there, you still have somewhere to aim for. Writing a series is like a journey to an unknown place. You don’t need a map to get about but it will definitely help if you get lost on the way!

I wrote a brief idea for each book when I first decided on the series. Only two of the five stuck almost exactly to that original plan, the other three took unexpected turns but at least I had a framework to build on.

Don’t overload the reader in book one.

It’s not necessary to introduce all the series characters in book one. Some of my later books would have been spoiled if the characters were already known. That was part of their appeal, they were either strangers, newcomers or reclusive.  However it is nice to meet the protagonist for the next book if at all possible. I also like to drop in characters who later appear as a lead. Sometimes readers pick up on them, other times they don’t, but it’s there if they look close enough! I also like to revisit characters. In all of my latter books you meet characters who have appeared in earlier books so you can catch up on them. These don’t need to be long scenes but it’s nice to see what they’re up to and how they’ve used what they learned in their own stories to help others!

As my latter books are still in the editing stage they’ve only been read by beta-readers, alpha readers and of course my lovely editor Aimee Walker. However from these beta readers, I’ve had two requests to use side characters in stories of their own. I told you, no one wants a series to end!

I’ve taken on these suggestions and am considering a spin-off series… Back to the drawing board and time to put my planning hat on.

I hope you find these tips useful when plotting and writing your series.

My Top Five Tips for writing a series:

PrevPreviousHow to use beta readers
NextIn Conversation With Lyndsey GallagherNext